Seven reasons why a Christian, should not practice yoga 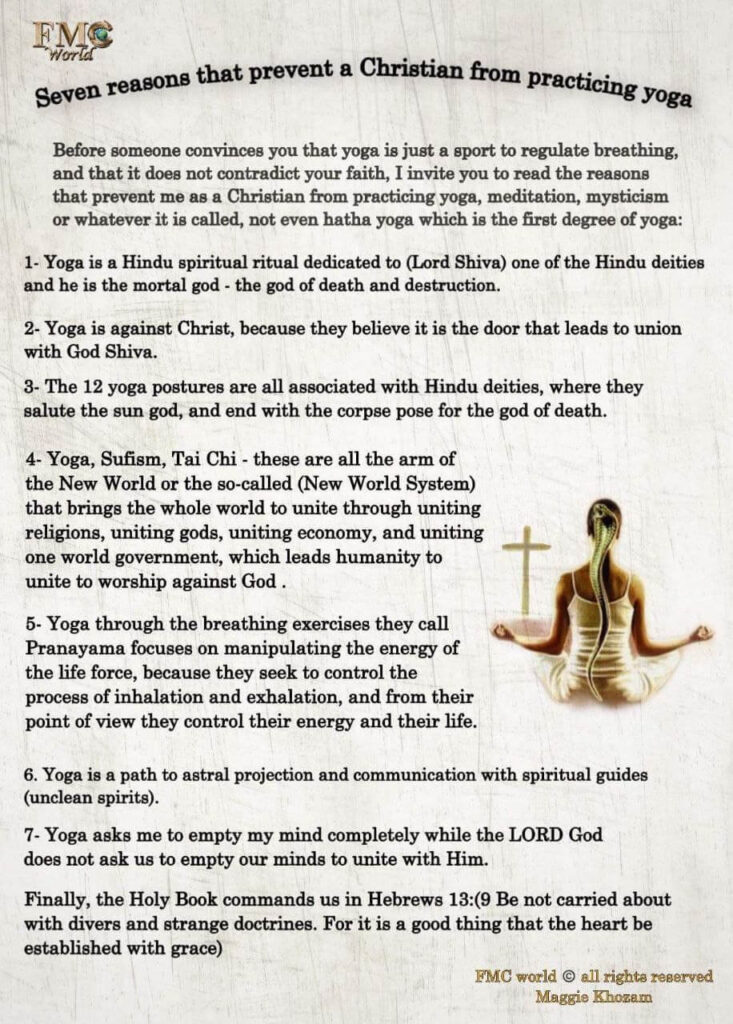 There are seven reasons why I, as a Christian, should not practice yoga, meditation, mysticism or whatever it is called, not even hatha yoga which is the first degree of yoga in which they deceive people into practicing it as a breathing exercise.

1- Yoga is not a sport. Rather, it is a Hindu spiritual ritual dedicated to (Lord Shiva) one of the Hindu gods, the mortal god or the god of death and destruction.
As for me as a Christian, the Lord God commanded me thus: (2 I am the LORD thy God, which have brought thee out of the land of Egypt, out of the house of bondage.
3 Thou shalt have no other gods before me..) I cannot perform any ritual honoring another god.
2- Yoga against Christ, as it is the door that leads to union with the Creator.
While we believe that Christ is the door, which there is no salvation without Him,
Christ said in John 14:6( I am the way, the truth, and the life: no man cometh unto the Father, but by me.) Let us not be deceived by a lie (that all mankind worships the Creator God, but each according to his own way, some through Sufism, some by Buddhism, and some by Muhammad) because there is no way to God the Father except through the Son, Jesus Christ.
3- All 12 yoga postures are associated with Hindu deities, where they salute the sun god, and end with the corpse posture for the god of death and the positions in between that in this case they worship other gods.
As for us, the Lord God commanded us in 1 Corinthians 10:(14…., flee from idolatry.)
4- Yoga, Sufism, Tai Chi – these are all the arm of the New Age or the so-called (New World System) that makes the whole world unite through uniting religions, uniting gods, uniting economy, and one world government, which leads humanity to unite to worship against God .
As for us, the Holy Spirit warned us in 1 Timothy chapter 4( 1 Now the Spirit speaketh expressly, that in the latter times some shall depart from the faith, giving heed to seducing spirits, and doctrines of devils)
5- Yoga through the breathing exercises they call Pranayama focuses on manipulating the energy of the life force, because they seek to control the process of inhalation and exhalation, and from their point of view they control their energy and their life.
As for us, the Lord also warned us about this in Ephesians chapter 2(2 Wherein in time past ye walked according to the course of this world, according to the prince of the power of the air, the spirit that now worketh in the children of disobedience) Here, what is meant by the air is not the oxygen we breathe, but the passions, which they try to control with what they call the energy of the life spirit.
6- Yoga is a way of astral projection and communication with spiritual guides, that is, with unclean spirits, to guide them in what to do.
As for us, we have the only way, which is the Lord Jesus Christ, and we have the only guide, which is the Holy Spirit, and for this reason, most of the followers of yoga refuse to believe in the existence of Satan, because in fact they do not see him because they are with him in his world they worship him and dwell in them, so how will they see him? They do not have spiritual wars with him like us, and they cannot see the spiritual war that we are exposed to, because they do not fight against him in the first place, they only fight because of their lusts, and then the destroyer who uses them for a while abandons them, and then throws them and throws their bodies to perish with diseases and depression.
7- Yoga asks me to empty my mind completely, and the Lord God did not ask us to empty our minds to unite with Him, Romans 12 He asked us for our mental worship and said(2 And be not conformed to this world: but be ye transformed by the renewing of your mind) The Lord God has not emptied my mind, nor paralyzed my will, nor suppressed my freedom.

Finally, we understand what the meaning of the words of the Lord Jesus Christ in Matthew 10:(34 Think not that I am come to send peace on earth: I came not to send peace, but a sword.) The yogis proclaim with their children: Peace to the other, peace to the world, and this is all an illusion. They imitate Christ in order to deceive you, saying: Come to us and we will give you peace, but in truth, what peace is this that they will give and some of them go to suicide and epilepsy and lose the ability to themselves, and suffer from headaches, diseases and aches?.
Hebrews 13:(9 Be not carried about with divers and strange doctrines. For it is a good thing that the heart be established with grace).