Get Your Child Attached to the Bible

Ten Steps to Get Your Child Attached to the Holy Bible 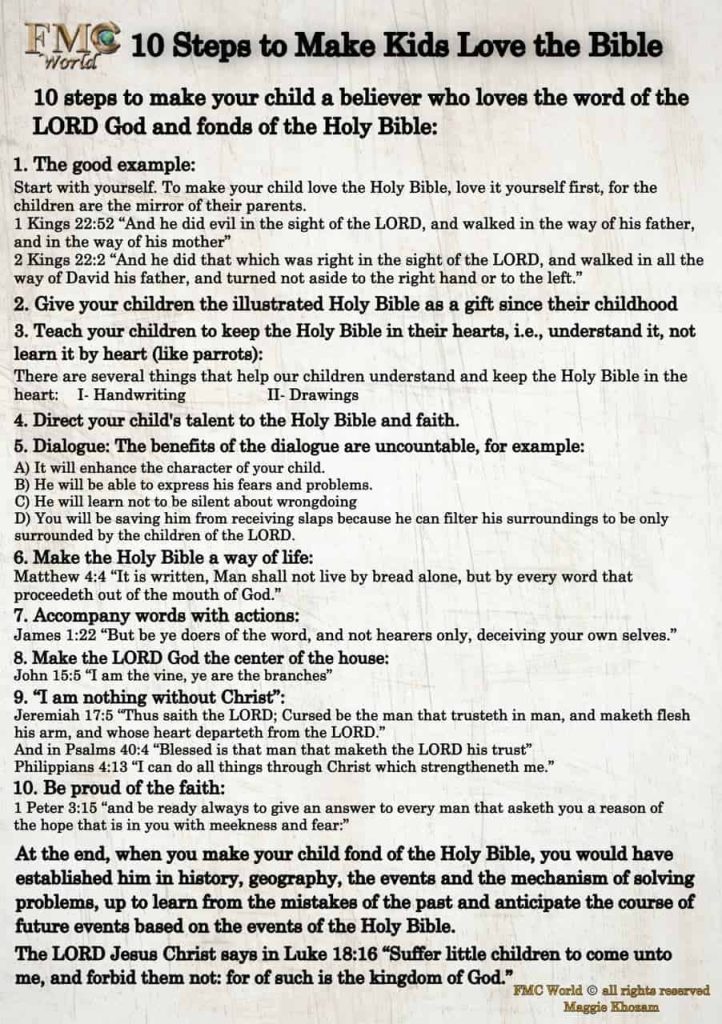 How do we make our children love the Holy Bible?
When your son grows fond of the LORD’s word, he will be a balanced child, able to solve his own problems, able to reprove himself of sins and know well how to do self-criticism before falling into sins.

At the end, when you make your child fond of the Holy Bible, you would have established him in history, geography, the events and the mechanism of solving problems, up to learn from the mistakes of the past and anticipate the course of future events based on the events of the Holy Bible. For example, when he looks at a nation which has been entirely corrupted, he concludes that there are plagues coming, as the Holy Bible had foretold us, there are also opportunities for repentance as the Holy Bible taught us and signs from the LORD that must be heard. Your son has read what happened in the lives of hundreds of people who preceded him, so he will build his character on the basis of the Holy Bible.
You should give the child according to his comprehension and age, as each age has its own way.
The LORD Jesus Christ says in Luke 18:16 “Suffer little children to come unto me, and forbid them not: for of such is the kingdom of God.”
The time is right for an honesty session with ourselves. Are we bringing our children closer to the LORD, or are we hindering their salvation?
Are we good role models to them?
Can your son say: “My father is my saint, and my mother is my saint”?
Let us work together and cooperate by inviting our children from their childhood to go to Jesus in order to be truly in good hands; beware from preventing them.
By your contempt for the Holy Bible, you are preventing your son, by not making time for our LORD, you are preventing your son, by your disrespect when you talk about the LORD and about the miracles, you are preventing your son.
As a result, you will reap what you sow in your children, either you make them saints or Pharisees; just inflated bubble which will collapse in the face of the difficulties of life.

Get Your Child Attached to the Bible with Maggie Khozam