Lady of Fátima VS Virgin Mary 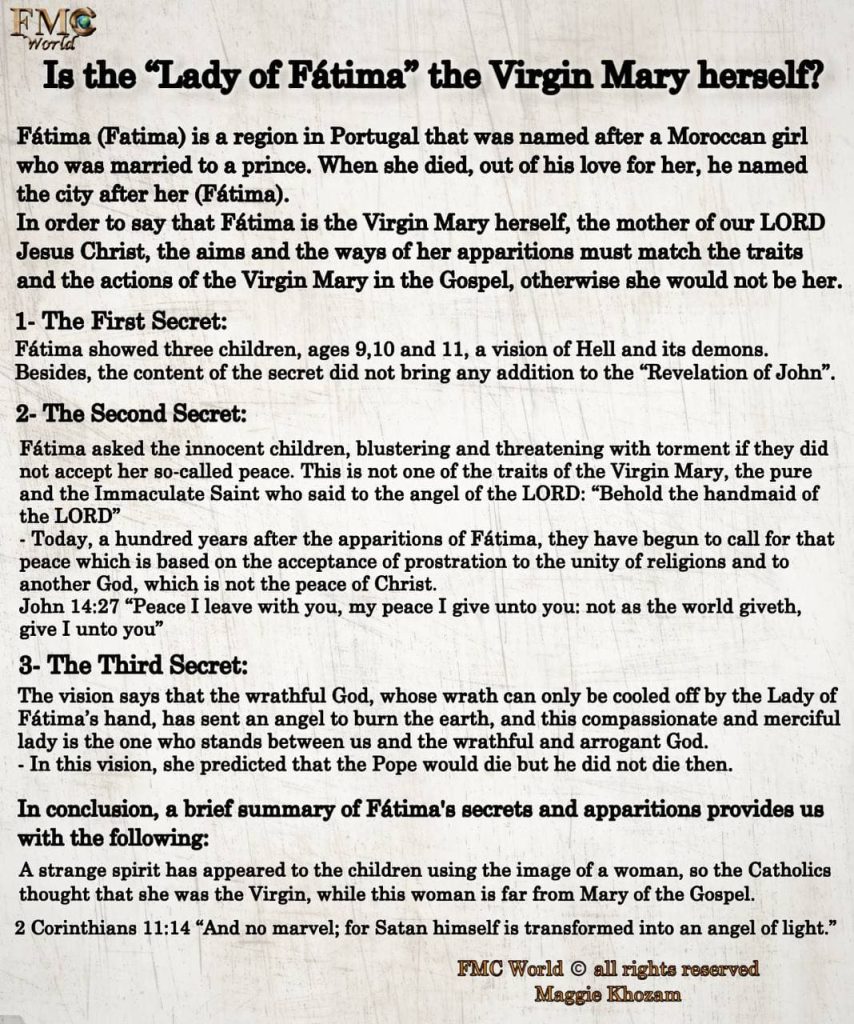 Is the “Lady of Fátima” the Virgin Mary? Was Her prophecy of the Apocalypse from God?
What is the story of Fátima, the apparitions, Medjugorje, and the Marian apparitions that have increased in the last hundred years?
Fátima (Fatima) is a region in Portugal that was named after a Moroccan girl, who was married to a prince hundreds of years ago. When she died, out of his love for her, he named the city after her (Fátima).
The first apparitions of the Lady of Fátima was in 1917, over a hundred years ago, back then she has introduced herself as “the Lady of the Rosary”.
In order to say that Lady of Fátima is the Virgin Mary herself, the mother of our LORD Jesus Christ, the aims and the ways of her apparitions must match the characteristics and the actions of the Virgin Mary in the Gospel, otherwise she would not be her.
This is where we will begin a quick study together of the personality of this woman who made these apparitions, by studying the secrets which Fátima gave to those to whom she appeared.

1- The First Secret:
Fátima showed three children ages 9,10 and11 a vision of Hell and the demons. Does it make any sense that the Virgin Mary has made three children of these ages see the demons and Hell?! Also what was the point of that?
Why would she say to them: “You must pray and endure the pain to save humanity?” How could three young children carry the sins of all mankind!!
If people are required to bear each other’s sins, then why did Christ come in the first place?
Not to mention, the content of the secret is quite similar to the “Revelation of John” in the Holy Bible. And here comes the most important question: “What is the purpose of Fátima’s apparition to these young children with a vision of Hell, which their minds won’t bear to see, whereas the same content of this vision is mentioned in the Holy Bible about the last days, the trumpets, the torment and the great tribulation?”

3- The Third Secret:
The vision says that the wrathful God, whose wrath can only be cooled off by the hand of the Lady of Fátima, has sent an angel to burn the earth, and this compassionate and merciful lady is the one who stands between us and the wrathful, arrogant and autocratic God, who is a murderer and a destroyer of humanity, in order to ward off the flames of the fire with the splendor of her hand, without much effort on her part; she can stop it with her own power, which the apparitions described as being greater than God’s.
– In this vision, she predicted that the Pope would die but this prophecy was not fulfilled, as he was shot, but he did not die. This is evidence that this woman in the apparition is unreliable and saying things which may or may not happen. This is the work of the devil, for he is the only one who does not know what will happen in the future because he has no authority over it. Therefore, he predicts things that will not necessarily happen. It is possible that some of his predictions would come true and others would not, which means that this apparition is not from our God.
– It was also mentioned in some sites that when she appeared in 1925 she was with her child in a luminous cloud, and the child said to Lucia: “Draw mercy from your holy mother’s heart, it is surrounded with thorns, which represent the ungrateful people who are still stabbing her heart and continue to do so, and no one is trying to remove the thorns by returning to God.”
In conclusion, a brief summary of Fátima’s secrets and apparitions provides us with the following:
A strange spirit has appeared to the children using the image of a woman, so the Catholics thought that she was the Virgin, while this woman is far from the immaculate, innocent and humble Mary of the Gospel, who would not demand anything for herself.
Fátima (the Lady of the Rosary) is a woman who interferes in politics and does not rest till all people kneel down and devote their hearts to her (i.e., to absolutely worship her) She threatens, blusters, kills and her apparitions are accompanied with pain and victims, so who is she?
From a Christian point of view, based on the teachings of the Holy Bible, the Holy Bible has already foretold that Satan can appear as an angel of light
2 Corinthians 11:14 “And no marvel; for Satan himself is transformed into an angel of light.”
Therefore, thus being said, this one who appeared in the form of a woman is none other than Satan, who took the circulating image of Mary, “to seduce, if it were possible, even the elect.” (Mark 13:22) and to make all mankind consecrate their homelands and people to him, thinking that they are prostrating to a divine apparition
Hosea 4:6 “My people are destroyed for lack of knowledge”