Maryam of the Qur’an

Maryam of the Qur’an VS Mary in the Gospel 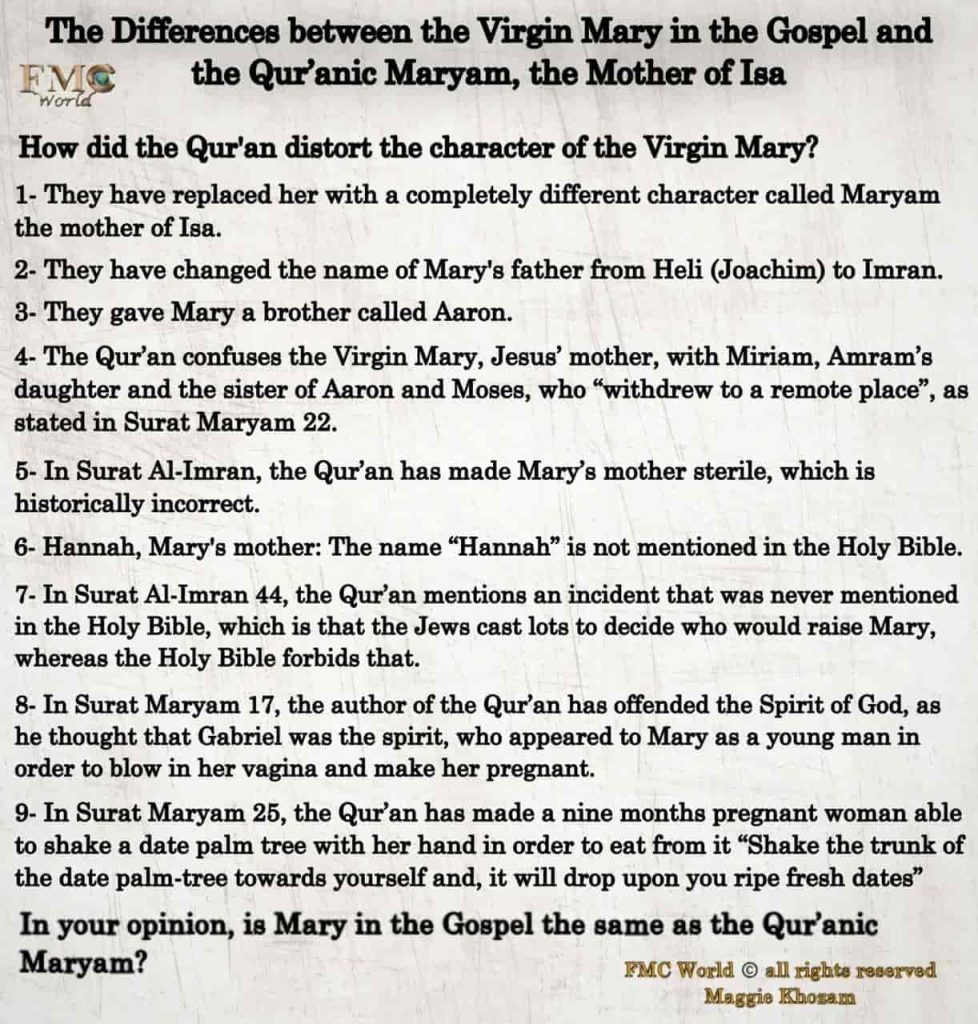 Is Maryam of the Qur’an the Same Mary the Mother of the LORD Jesus Christ Who is Mentioned in the Gospel?

One of the signs of satanic unity among religions is that they put together illusory things in common in order to deceive their followers into believing that all are one and all are truly following one God, so that they would accept this unity.
One of the most important common delusions between Islam and Christianity is “Isa” and Isa’s mother “Maryam”.
In order to know each of them, we have to go back to the beginning of Islam, and even to the time before it, i.e., to the beginning of the Catholic Church – not Christianity in general – about five hundred years after Christianity. The Catholics went astray from the biblical Christian belief, which was handed down to the saints two thousand years ago, as they have deified Mary, given her several titles such as “the Queen of Heaven and Earth”, made her born from an immaculate conception like the LORD Jesus Christ and made her also a partner in the redemption and salvation, right down to the point that they made her the one who brings the perished souls out from Purgatory.
On this “non-Christian” basis, the Qur’an was built in order to refute this distorted and fake thing; as the author of the Qur’an has claimed that he restored Maryam’s normal position as a human being. Of course, both things are wrong and non-Christian because Mary is not a god and at the same time she is not repugnant or rejected or despised among her people, as the author of the Qur’an has presented her.
True Christianity still exists, as well as the Holy Bible, which shows us the character of the Virgin Mary as it really is. But Satan always gives you two extreme and opposite options, asking you to choose one, so you would stand confused between both of them, forgetting that they both are made for the same purpose, which is to mislead you.

Muslims claim that they have honored Maryam, as she is the only woman who has a “surah” in her name in the Qur’an, while the Qur’an did not mention the mother of Muhammad in a good way, nor his women.
But we must answer them: Who is this “Maryam” whom they honor? Who is this “Maryam” mentioned in the Qur’an?
Who is the daughter of Imran, the sister of Aaron and the mother of Isa?
The author of the Qur’an made up a “nobody” and honored her in his own way, just as he did with Isa!
While in fact, as Christians, we neither care about this “Isa” nor about his mother because they are distorted and unreal sort of characters, both in names and content, of Jesus Christ and his mother Mary.

In the end, if you want me, as a Christian, to respect your religion and your Qur’an, and to honor your prophets then you should at least pronounce the names of the Holy Bible’s saints and prophets in a correct and decent way, as the writers of the Holy Bible wrote them. It does not make sense that you are asking me to respect you, while you distort my sanctities!

The Virgin Mary is someone who had the honor of giving birth to the LORD, and she was never ashamed nor humiliated in front of her people. She is a saint and a blessed in the fullest sense of the word, thus she does not need a religion that came after 600 years to elevate her status, as basically, no one has been able to degrade her value.
She is neither a god nor a humiliated woman. She is a blessed saint:
Luke 1 “46- And Mary said, My soul doth magnify the LORD,
47- And my spirit hath rejoiced in God my Saviour.
48- For He hath regarded the low estate of His handmaiden: for, behold, from henceforth all generations shall call me blessed.”
And that’s when Elizabeth, the wife of Zacharias, said to her in the Holy Spirit:
Luke 1: “42- And she spake out with a loud voice, and said, Blessed art thou among women, and blessed is the fruit of thy womb.
43- And whence is this to me, that the mother of my Lord should come to me?”
They saw Mary as the Mother of the LORD, and this is the truth about her in the Gospel.
If you want a unity of religions on the basis that Mary unites us, we will tell you that Mary is the mother of the LORD Jesus Christ, so if you share this belief with us, then you are welcome.
As for building mosques with strange names such as (Maryam the daughter of Imran, or Maryam the mother of Isa, or the sister of Aaron…etc.,) this thing does not bring us together, nor does it concern us and you are not even thanked for it, because she is a character that was invented by you and has nothing to do with Mary in the Gospel.

Mary remains exactly as the Angel has told her when he appeared to her:
Luke 1:28 “And the angel came in unto her, and said, Hail, thou that art highly favoured, the LORD is with thee: blessed art thou among women.”