The Law of Moses and the Code of Hammurabi 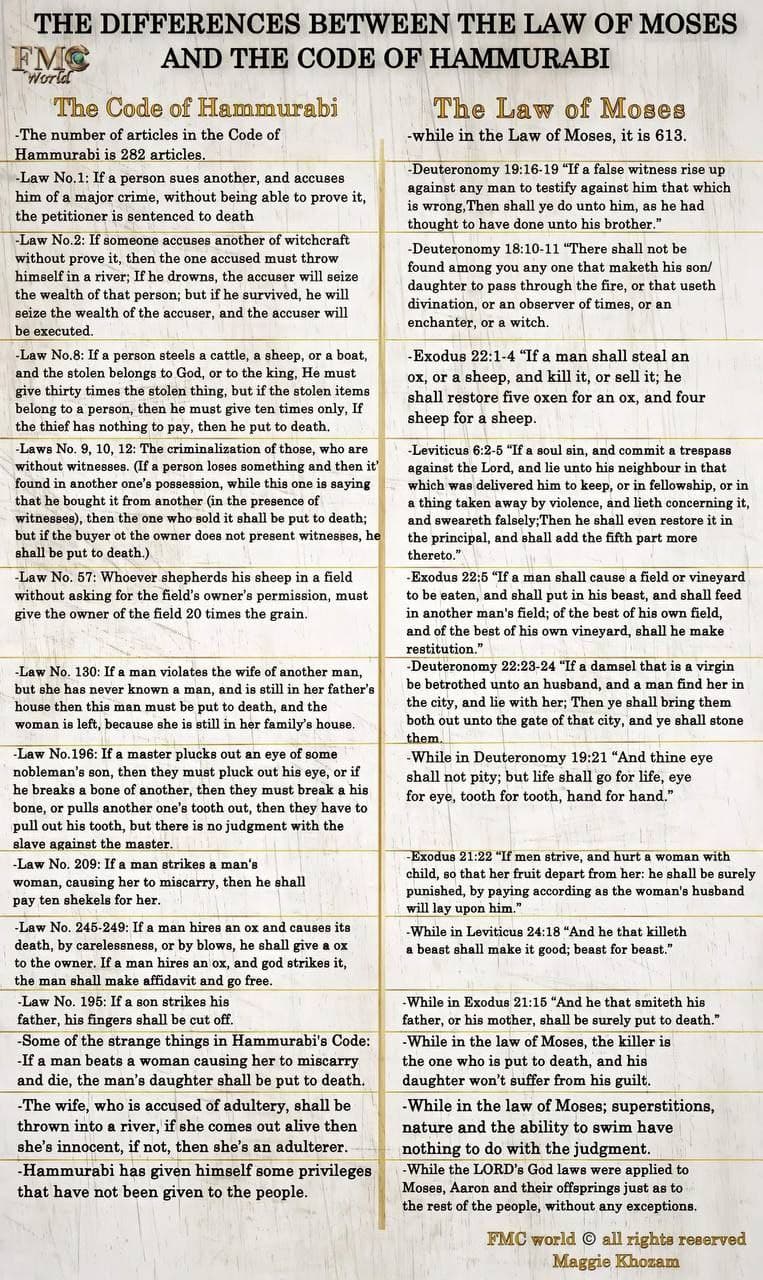 The enemies of the Bible publish from time to time rumours that the law of the Torah was borrowed from the Code of Hammurabi, and that the Jewish people wrote the Talmud and the Torah after their return from the Babylonian captivity, where they derived their law from the Babylonian civilization.
Is there really a similarity between the Law of Moses and Code of Hammurabi?
What is the oldest law on earth?

Let’s start with the Code of Hammurabi and the twelve stone tablets that were found.
Is it really the Code of Hammurabi the oldest legislation in the world?
In fact, Hammurabi is not the owner of the oldest law in the world, as the law of Noah preceded it by a thousand and five hundred years. This law, absent from most of us, is found in the Talmud in the Hebrew language they call today (universal laws), meaning universal laws
Its number of articles is seven, embodying the human values of the relationship with the Creator and with human beings, and it states:
Do not worship idols – Marry to have children – Do not commit adultery – Do not eat an animal with its blood – Do not steal – Do not kill – Do not bear false witness.
So, the oldest law on the face of the earth is not the law of Moses or Hammurabi, but rather the law of Noah and it is considered the basis for all laws,
It included the commandments that Noah gave to his sons Shem, Ham, and Japheth after The Flood.

I have enumerated for you a few items in a hurry, and who said that there are similarities between the law of Hammurabi and the Law of Moses,
Personally, I have not seen any similarities, neither in the judgment, nor in the manner in which the matter is presented, nor in terms of the result reached by the decision of the law.
Also, there are people to this day, such as the Assyrians and Yazidis, who know about the Code of Hammurabi, they do not contain any kind of sacrifices and the law of purification.
Or any kind of forbidden and permissible foods, as these matters were not approached by the laws of Hammurabi at all.
Those who study the two laws will find in the Law of Moses 613 articles, precise details in which the law of pure and impure foods is mentioned, the law of leprosy, the law of diseases and how to purify them, inheritance, life and death, marriage … etc.
From small matters to destroying homes and big matters such as murder and fornication.
All these detailed laws are not found in the Code of Hammurabi, which focused on the separation between gentlemen and slaves, and between kings and common people, and made most of the laws result in murder to prevent the spread of immorality and crimes.