The End of Days (the Plagues and the Vials) 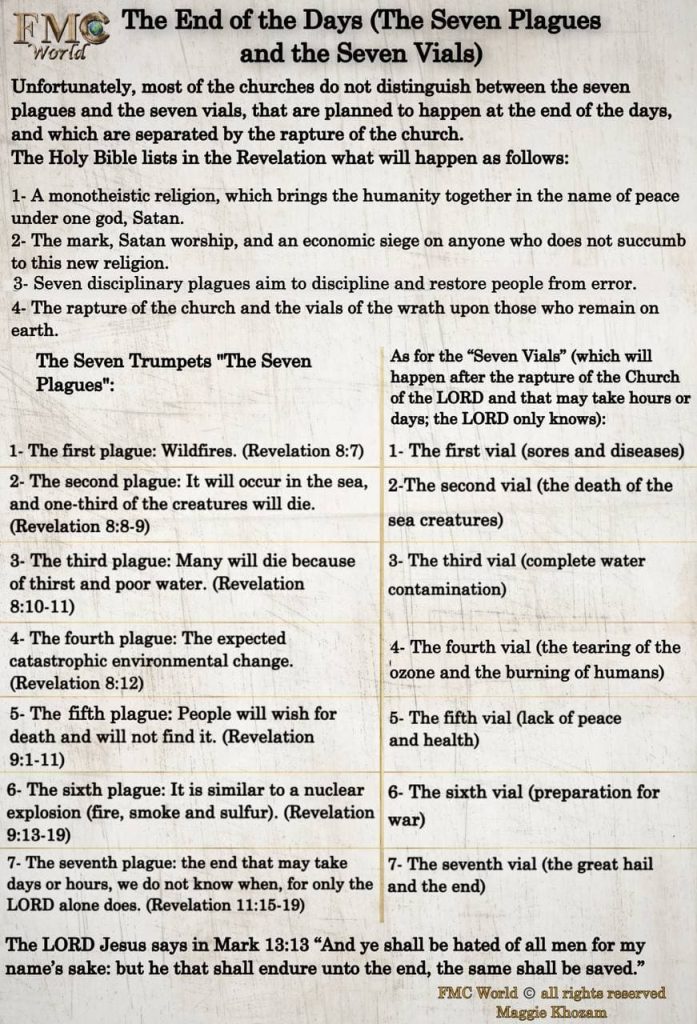 When we read the Book of Revelation carefully, we realize the extent of the error and the spirit of confusion that will prevail at the end of days. There will be plagues from the LORD God on mankind before the rapture of the believers, who will not be affected by these plagues.
After the rapture, the LORD God will bring down the vials of the wrath on the earth, which will be for chastening people in order to wake up and turn from their satanic worship. The people will think that these plagues are from Satan, so they will harden their hearts and refuse to repent their sins, while they will follow the peace, which is coming in the context of uniting nations and peoples to worship Satan (which has already started with the unity of religions signed by 70 religions and denominations under the patronage of the Catholic Pope, Francis) thinking that, this false peace is from God, when in fact it is from Satan. The Holy Bible has foretold us, two thousand years ago, what will happen exactly in the last days

Revelation 17 “12- And the ten horns which thou sawest are ten kings, which have received no kingdom as yet; but receive power as kings one hour with the beast.
13- These have one mind, and shall give their power and strength unto the beast.”

“One mind” indicates one system; where there will be one government on earth, (watch the episode: Corona the gateway to the new world order) as Corona is just a gateway to a new world order. The Holy Bible says about this system:
Revelation 17:16 “And the ten horns which thou sawest upon the beast, these shall hate the whore, and shall make her desolate and naked, and shall eat her flesh, and burn her with fire.”

This means that the new world order will be based on the concepts of justice, mercy, peace, honor and chastity to deceive, if it were possible, even the elect. But later we see that the ten kings will tread on the harlot:
Revelation 17:17 “For God hath put in their hearts to fulfil his will, and to agree, and give their kingdom unto the beast, until the words of God shall be fulfilled.”
The spirit of fornication will dominate all the nations around the world, (here we mean the spiritual fornication which is following the anti-God) so we will see opposites and divisions. As a human being, you are required to be careful, because each of them serves Satan in his own way, and the fact that both exist in two opposing sides, is only to mislead you.
For example: you will meet a person from another religion who tries to convert you. And another one, who is of your religion, stands against him, which makes you think that he is on your side, but in fact he is a follower of the beast too. There will be also a third person who stands against the other two, yet he is sold to the beast as well; for all have gone out of the way and sold themselves to the beast. This is the meaning of what is mentioned in the Holy Bible that “he will deceive even the elect, if it were possible”. This is how the time, which accompanies the plagues, will be.

“The Seven Trumpets” The Seven Plagues:
The Book of Revelation told us that the LORD God has protected His children who keep His commandments, and have the testimony of Jesus Christ; as the LORD God has kept them from the coming plagues, which He has authorized and allowed to be on the earth
Revelation 7 “2- And I saw another angel ascending from the east, having the seal of the living God: and he cried with a loud voice to the four angels, to whom it was given to hurt the earth and the sea,
3- Saying, Hurt not the earth, neither the sea, nor the trees, till we have sealed the servants of our God in their foreheads.”
The chastening plagues will be before the rapture of the faithful children of God, who are sealed by the Holy Spirit. Though these plagues won’t affect them, yet they will suffer “Great Tribulation”, from starvation, persecution and a lot of oppression at the hands of the people of this world in order to make the children of God kneel down to the “beast”, Satan.

They will take place before the rapture of the LORD’s children who are sealed by the Holy Spirit, and there will be many martyrs and lots of blood, that is why when we depart from this world (i.e.,by the rapture), the seven vials of the LORD God’s wrath upon mankind will be so strong; people will almost bite their tongues in pain.
Revelation 15:7 “And one of the four beasts gave unto the seven angels seven golden vials full of the wrath of God, who liveth for ever and ever.”
As for the believers,
1 Thessalonians 4:17 “Then we which are alive and remain shall be caught up together with them in the clouds, to meet the Lord in the air: and so shall we ever be with the Lord.”
Here I want to mention something very important, whoever waits to see the coming of Christ in the flesh, is completely mistaken. The LORD Jesus Christ warned us in
Matthew 24:23 “Then if any man shall say unto you, Lo, here is Christ, or there; believe it not.”
Rather, when Christ comes to condemn the world, He will separate the goats from the sheep
Matthew 25:33 “And he shall set the sheep on his right hand, but the goats on the left.”
We will meet Him in the clouds, and our bodies then will be different from the ones we have now; as the earth with everything on it will melt. Know that, if Christ comes as a human, in flesh and blood, he will be the Antichrist. He will perform miracles, claiming to be Christ, and he will show kindness and mercy right up to sending down fire from the heaven in order to show his abilities.
Now we have finished the stage of plagues, the church (i.e., the congregation of believers who are steadfast in Christ) has been raptured out of this world, and only the corrupted, who have not repented despite all the scourges that happened, remain on earth.
Then the vials of the wrath of the LORD shall begin upon the earth and its inhabitants, and the Holy Bible tells us why those people will not repent of their error
Revelation 13:5 “And there was given unto him a mouth speaking great things and blasphemies; and power was given unto him to continue forty and two months.” (That means 3 years and a half)
Revelation 13:7 “And it was given unto him to make war with the saints, and to overcome them: and power was given him over all kindreds, and tongues, and nations.”
What will make them unrepentant, is that Satan will fight God’s children and will defeat them; so while the plagues of God will be upon the servants of Satan, a siege, starvation and great tribulation will befall the believers.

The Seven Vials:
They will take place after the rapture
Revelation 16:1 “And I heard a great voice out of the temple saying to the seven angels, Go your ways, and pour out the vials of the wrath of God upon the earth.”
So, these vials will be on the sinners who remain on earth and who will not repent, despite the first seven plagues, due to the error and the great things which the beast will do.
1- The First Vial (sores and diseases)
Revelation 16:2 “And the first went, and poured out his vial upon the earth; and there fell a noisome and grievous sore upon the men which had the mark of the beast, and upon them which worshipped his image.”
2- The Second Vial (the death of the sea creatures)
Revelation 16:3 “And the second angel poured out his vial upon the sea; and it became as the blood of a dead man: and every living soul died in the sea.”
3- The Third Vial (complete water contamination)
Revelation 16 “4- And the third angel poured out his vial upon the rivers and fountains of waters; and they became blood.
5- And I heard the angel of the waters say, Thou art righteous, O Lord, which art, and wast, and shalt be, because thou hast judged thus.
6- For they have shed the blood of saints and prophets, and thou hast given them blood to drink; for they are worthy.”
4- The Fourth Vial (the tearing of the ozone layer and the burning of humans)
Revelation 16 “8- And the fourth angel poured out his vial upon the sun; and power was given unto him to scorch men with fire.
9- And men were scorched with great heat, and blasphemed the name of God, which hath power over these plagues: and they repented not to give him glory.”
5- The Fifth Vial (lack of peace and health)
Revelation 16 “10- And the fifth angel poured out his vial upon the seat of the beast; and his kingdom was full of darkness; and they gnawed their tongues for pain,
11- And blasphemed the God of heaven because of their pains and their sores, and repented not of their deeds.”
6- The Sixth Vial (preparation for war)
Revelation 16 “12- And the sixth angel poured out his vial upon the great river Euphrates; and the water thereof was dried up, that the way of the kings of the east might be prepared.
13- And I saw three unclean spirits like frogs come out of the mouth of the dragon, and out of the mouth of the beast, and out of the mouth of the false prophet.
14- For they are the spirits of devils, working miracles, which go forth unto the kings of the earth and of the whole world, to gather them to the battle of that great day of God Almighty.”
7- The Seventh Vial (the great hail and the end)
Revelation 16 “17- And the seventh angel poured out his vial into the air; and there came a great voice out of the temple of heaven, from the throne, saying, It is done.
18- And there were voices, and thunders, and lightnings; and there was a great earthquake, such as was not since men were upon the earth, so mighty an earthquake, and so great.
19- And the great city was divided into three parts, and the cities of the nations fell: and great Babylon came in remembrance before God, to give unto her the cup of the wine of the fierceness of his wrath.
20- And every island fled away, and the mountains were not found.
21- And there fell upon men a great hail out of heaven, every stone about the weight of a talent: and men blasphemed God because of the plague of the hail; for the plague thereof was exceeding great.”

We pray that God will strengthen His elect and the ones He has invited
Mark 13:33 “Take ye heed, watch and pray: for ye know not when the time is.”
So they may hold fast to the LORD, despite the tribulation and distress
Mark 13:13 “And ye shall be hated of all men for my name’s sake: but he that shall endure unto the end, the same shall be saved.”